Mt. Aso is the largest active volcano in Japan, and with a 25 kilometer caldera, among the largest in the world (wikipedia). The town of Aso is in the middle of this caldera, which is one huge flat spot.

Hiking is already as stroke of luck weather wise, but this has an added factor of volcanic activity - all roads are closed when volcanic activity is high, so if visiting, make sure you have alternative plans if the mountain is closed. 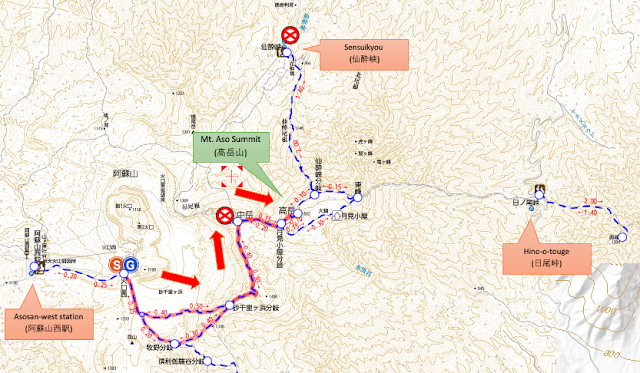 Throughout the year! EXCEPT for the periods with active volcanic activity. Time wise, take note that the road opens at 8:30am (or 9am from December to March)

Given the bus schedule, the bus is not possible, unless you beat the Japanese time by 35 minutes. Very likely, but if you miss the bus, call the taxi company at 0967-22-0825. OR, take the taxi going up and start early, then take the bus going down.